Japanese artist Miya Hiro's mission is to connect people from all over the world through his art. He has been living in Leipzig for a residency at Das Japanische Haus since 2015. He just began a new project with Spanish artist Ana Magallanes Sánchez.
This interview focuses on his life and their ongoing project. The photo below contains a painting which was made by them and Mexican photographer Coral Castillo Mar in March.
(This interview was done after reading this article by one cut one bow which features Miya's life in detail.)
This interview is also available in Japanese. I tried my best to retain his way of speech and personality; however, some of the subtleties might have been lost in translation. 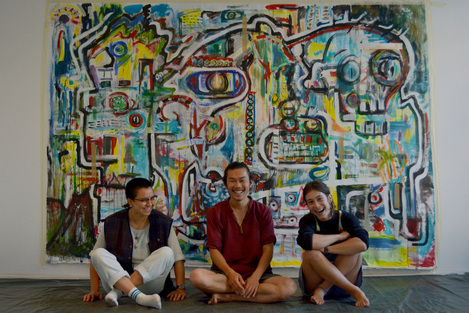 From left to right: Coral Castillo Mar, Miya Hiro, Ana Magallanes Sánchez
— I read your interview. Seemed like you experienced a lot of different things!
(laugh) No, I just like tasting many things. Everything seems unfinished.

ーWhat was the reason for you to go to India during college?
I stayed there for a month. I had the urge to release my inner energy for a long time. I thought I would be able to do so through art, but I was confused and felt lost when my college professor told me to “feel the universe” in class. So I wanted to go somewhere I have no idea what's happening in order to find another way to release my inner energy. Now that I look back, going to India was to be able to feel the warmth of home — it’s like a teenager traveling alone to unknown places by bike late at night.

ー What were you doing in India?
I wandered all over the country, but I was having stomach problem half of the time. (laugh) Because being in India had me experience the meaning of “death” so closely, I felt strongly what means to be “alive”. It might not be too difficult for someone who is used to traveling, but I was really scared because this was my very first trip overseas and I was alone. After five minutes of arrival, I already felt like going home.

ー According to the interview, you went home after graduating from college and began a hotel business. Do you still run the same hotel?
Yes. My mother is taking care of office work while I am gone. Only when some important decisions need to be made, she is supposed to consult with me. I graduated from a business high school and I have a few licenses in accounting and computing, which was very helpful for making my business happen. I could have chosen to become an accountant, but I didn’t like the idea at all. I wouldn't have enjoyed it if I had to chase numbers throughout my life. Of course my parents were concerned about my future, but I went to an art university in the end. 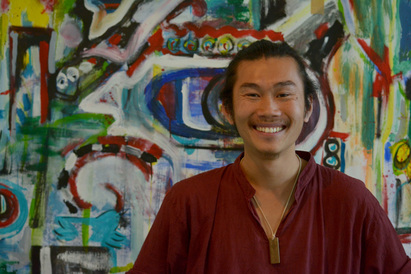 —Were you still painting while you were running your hotel and working as a carpenter?
After graduating from college, I gradually ran out of ideas. I ended my career as an artist right then and decided to pursue a career as a carpenter. Then I went to a carpentry school in Chiba for a year. I had so much fun making things by hands. After finishing the carpentry school, I moved to Tottori because I found a job opening for carpenters.

ー When did you start painting again?
I quit the carpenter job after four months after all.  I wandered around in the area, looking for interesting people. I started making connections and networks with local people. I became friends with people who were planning on opening a restaurant so I decided to help them. During the time I was helping them, I had an opportunity to paint with local kids. This experience reminded me of the joy of painting. After this project, I went to Okinawa for no reason. I guess I didn't feel like going back home (to Chiba) because I quit the carpenter job in such a short amount of time. When I was at the beautiful shore in Okinawa, I realized that I had been wanting to paint.

Before coming to Leipzig, I stayed in Portugal and Paris for about two weeks each. I found out about Das Japanesche Haus and their residency program through the internet. I contacted them right away and moved to Leipzig. I came here in 2015, so it's been already a year since then. 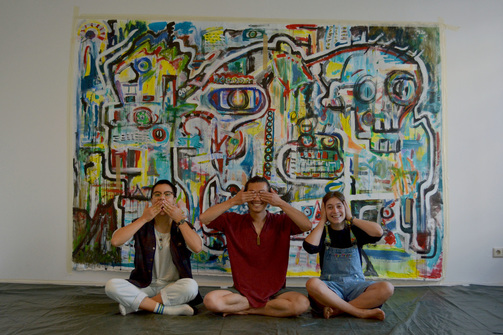 ー How do you feel about being minority after growing up in one of the most homogeneous country (Japan)?
It is very interesting. I thought there's a stereotypical image of Japan being technologically advanced, but people here seem to have no impression about Japan, good or bad. It's probably too far away. But having no stereotypes or images sets me free to do anything.
Throughout the year I surveyed people who visited Das Japanische Haus about their home country. These people came from 66 different countries! It was very surprising. People here don't have much money but they have a lot of time. So we help out each other a lot. ​I meet many people including refugees at Das Japanische Haus and I think my role is to connect people from different countries.

ー You just began a new project with your collaborator Ana Magallanes Sánchez. How did this happen?
When Ana came to Das Japanische Haus, I immediately felt something different about her. Her eyes shined in a particular way. We quickly found out that we were painters and began painting together although we weren't able to communicate through language at that time. This (the painting in the picture) is the first one we made together. When I paint, I hear voices from my painting; it tells me where to paint or which colors to use. But when I paint with Ana, it's like "the voice" came to life! Ana sometimes paints over the place where I really liked, but it doesn't offend me, it actually inspires me. I think we work very well together.

The current project that we're working on is to paint with local people in many different locations. We will cut the finished canvas and combine the parts that was painted in different locations altogether to create one giant artwork. We have done this in Japan, Lithuania, and Leipzig so far. I think it's amazing that a few hundreds people are creating one massive artwork "together" through this project.

I believe that everyone is an artist. Those who have never painted even could create a great painting. Painting, even just drawing one line, requires the person's muscle to move, which means the person's whole life becomes the line. I have seen many people who started painting after participating with this project. I saw their eyes shine more vividly. This project can provide this kind of experience, which I hope to continue on in many more different locations.
This project connects people all over the world and they can feel the warmth of people who they have never met...
Thank you, Miya for a great story!
Ana and Miya are planning on visiting Spain, Africa, England, Brazil and many more countries to do this project.
​If you are interested in keeping up with his work, visit http://miyahiro.jimdo.com/.
Upcoming next, Miya's collaborator, Ana Magallanes Sánchez! Stay Tuned.
photography & interview by Michiko Saiki
​August 21, 2016